Posting a hodgepodge of links after a rather wonderful time hiking and camping, solving puzzles, and the semester starting all together too soon for my taste.

The unbearable maleness of Wikipedia.

Hanna Wallach’s talk at the NIPS Workshop on fairness.

Reframing Science’s Diversity Challenge by trying to move beyond the pipeline metaphor.

An essay by Daniel Solove on privacy (I’d recommend reading his books too but this is shorter). He takes on the “nothing to hide” argument against privacy.

I don’t like IPAs that much, but this lawsuit about lettering seems like a big deal for the craft beer movement.

I’ve always been a little skeptical of Humans of New York, but never was sure why. I think this critique has something to it. Not sure I fully agree but it does capture some of my discomfort.

Judith Butler gave a nice interview where she talks a bit about why “All Lives Matter,” while true, is not an appropriate rhetorical strategy: “If we jump too quickly to the universal formulation, ‘all lives matter,’ then we miss the fact that black people have not yet been included in the idea of ‘all lives.’ That said, it is true that all lives matter (we can then debate about when life begins or ends). But to make that universal formulation concrete, to make that into a living formulation, one that truly extends to all people, we have to foreground those lives that are not mattering now, to mark that exclusion, and militate against it.”

A nice essay on morality and progress with respect to Silicon Valley. Techno-utopianism running amok leads to bad results: “Silicon Valley’s amorality problem arises from the implicit and explicit narrative of progress companies use for marketing and that people use to find meaning in their work. By accepting this narrative of progress uncritically, imagining that technological change equals historic human betterment, many in Silicon Valley excuse themselves from moral reflection.”

I’m on the organizing committee for this pretty cool conference at MIT this week. Any readers of the blog who are in Cambridge on Friday might want to attend the plenary lecture. I hear it’s going to resolve a fundamental enigma that has been puzzling scientists for decades.

The MIT Mystery Hunt ended a little over a week ago — the premise is that a coin is hidden somewhere on campus and teams have to solve a bunch of puzzles to find its location. The prize for winning is writing it the next year. It was the longest hunt on record — 75 hours and 18 minutes if you count from the kickoff event, and 73 if you count from when the servers went live. My team, whose name is the entire text of the book Atlas Shrugged (although we often used the shorter name PART I: NON-CONTRADICTION; CHAPTER I: THE THEME ‘Who is John Galt?’…), managed to emerge victorious. Here’s a footprint outline we were given as part of an event puzzle:

Our team name on a footprint

And here are some fuzzy snaps of the coin:

The coin, reverse. Now we can raise the debt ceiling.

The hunt was so long because many of the puzzles were underclued and the team running it, Manic Sages, essentially mis-estimated how hard the Hunt would be (from gameplay and actual puzzles). Naturally there was much wailing and gnashing of teeth on the internet after this, and a lot of people took the Sages to task. Some of this criticism was a bit unfair, I think. The Sages put on a huge event for more than a thousand people, and much of it was quite fun. There were problems, sure, but let’s not get hyperbolic here.

Of course, hyperbole is par for the course, and Wired ran this piece by Thomas Synder who indulges in some pretty questionable plot extrapolation to conclude that there is a “trajectory” towards longer and longer hunts. For reference, here are the solving times for hunts up to 2010, showing the mysterious trend Snyder flags is more or less fabricated. So basically that line of argument is just hand-wringing. But why the calls for smelling salts?

The crucial line is this : “[w]hat started as an MIT-only event has now become a mainstay on the puzzle calendar.” Puzzle writers and solvers such as Snyder think that MIT Mystery Hunt puzzles should be less… well, MIT. One of the metapuzzles required you to know something about Feynman diagrams. There was a fractal word search. This is not a complaint about puzzles having too many steps, but about them being too nerdy or too inaccessible to those who have a “puzzle calendar.” Of course, those sorts of things are right up the alley of some MIT students. The subtext of this article is that it’s just not “professional” enough.

The Hunt is a free event (for solvers) that costs several thousands of dollars to put on, is much longer than most other puzzle events, and is done entirely by volunteers. In the case of Sages (and my team), many or most of those people are students. The sense of entitlement voiced by Snyder in this article (and by others elsewhere) is palpable. The fact that it’s a mainstay of the “puzzle calendar” is irrelevant — the Mystery Hunt owes its participants a good time, and those participants are still largely drawn from the MIT community, I think. Sure there were moments when I was not having fun, but also moments when I was having a lot of fun solving. There were some great/innovative puzzles in this hunt, and other great/innovative puzzle ideas. I wouldn’t keep going to Mystery Hunt if it was going to be like any other puzzle contest, and this hunt definitely delivered, even if reading some of the solutions breaks my brain.

Just next year, we’ll try to make it shorter, of course.

Robbie made some corrections to his earlier plot: 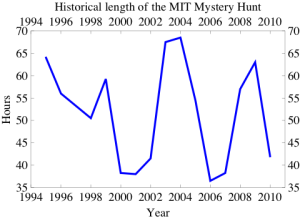 Via Robert Buckingham, a graph of the length of the MIT Mystery Hunt: 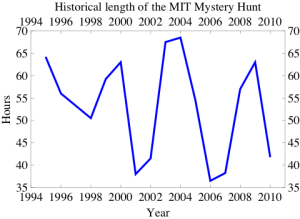 I always quote 60 hours to shock people about how long it is, but that seems a little extreme.

This year I had to hunt from Berkeley due to thesis pressures by keeping in touch via AIM and Skype. Staying awake for a long time to work is much harder when nobody else is around to help keep the energy up. But sleeping 3 hours in your own bed is about four times as rejuvenating as sleeping 3 hours on a couch or floor.

Just one observation for now : infinitely ascending chains of cryptic crosswords with interchangeable clues are awesome. But try not to pay attention to them when they start talking to you.

I had this idea a long time ago for a shirt that one could sell to MIT students and alums. I’m sure it would go over well — I’d get one. Maybe I should set up a cafepress thing for it?

T minus 2 hours and twenty-three minutes.

I found these on a post-it note from his book Topology. I took the class in spring 2000, which feels like ages ago. He ended up writing me a recommendation letter for grad school, so I suppose I have him to thank for where I am now.

I have more quotes somewhere in my notes for the class, but I have no idea where those are. I have tons of juicy quotes in my probability notes, but those have been AWOL for years, more’s the pity.

I spent the morning reading and working in the 1369 Coffeehouse in Central Square. It was like the good old days except that this time I had a laptop. Perhaps it’s just me being wistful and reminiscing, but I find the coffeehouses in Cambridge/Somerville significantly better than the ones in Berkeley. Maybe it’s because the weather makes you appreciate them more.

The music was perfect — Gotan Project, Tosca, and Django Reinhardt. I feel like I’m home.