Jan Hein van Dierendonck, a science writer and illustrator/cartoonist from Leiden, recently contacted the IT Society about an oil painting he made of Claude Shannon. He has kindly given permission to post it here. It will be used by some of the Shannon Centenary events this year. 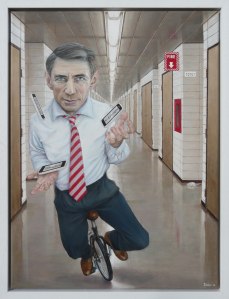 In the Forties a juggling Claude Elwood Shannon rides a unicycle down the endless hallways of Bell Labs, a telecommunications research laboratory south of New York. Perhaps this balancing act puts his brilliant mind in the right state to look at complex problems in an original way and to devise the formulas that initiate the Digital Era.

As a 21-year-old master’s degree student at the Massachusetts Institute of Technology, Shannon wrote his thesis demonstrating that electrical applications of Boolean algebra could construct and resolve any logical, numerical relationship. In 1948 this mathematician, electronic engineer, and cryptographer published a landmark paper that laid the foundation for information theory. From that moment on, information is something computable. Whether you are dealing with images, text or sound: convert everything into zeros and ones and remove all redundant information and noise. This has changed our world completely. Without Shannon’s Information Theory, your phone simply wasn’t smart.

Averse to fame, the professor in electronics preferred tinkering with his amazing magnetic mouse in a maze with memory and his mechanic juggling robots. He also refined his Juggling Theorem: the number of hands (H) multiplied by the total time a ball spends in the air (F) and is held in a hand (D) is in balance with the number of balls (N) multiplied by the total time a hand is empty (V) and holding a ball (D).

Like many, I was shocked to hear of Prashant Bhargava’s death. I just saw Radhe Radhe with Vijay Iyer’s live score at BAM, and Bhargava was there. I met him once, through Mimosa Shah.

Most people know Yoko Ono as “the person who broke up the Beatles” and think of her art practice as a joke. She’s a much more serious artist than that, and this article tries to lay it out a bit better.

Via Celeste LeCompte, a tool to explore MIT’s research finances. It’s still a work-in-progress. I wonder how hard it would be to make such a thing for Rutgers.

In lieu of taking this course offered by Amardeep Singh, I could at least read the books on the syllabus I guess.

Muscae volitantes, or floaty things in your eyes.

A rather pretty video of an L-system made by my friend Steve.

LACMA, which I finally saw with a friend in February, has decided to offer high-resolution downloads of many of the items in its collection. This Ganesha has a pretty impressive belly. Via MeFi.

This may answer David Bowie’s question.

This slideshow makes me want to go to Slurping Turtle again.

Sometimes I wish we could just name p-values something else that is more descriptive. There’s been a fair bit of misunderstanding about them going on lately.

Well, SPCOM 2012 is over now — it was a lot of fun and a really nice-sized conference. I missed the first day of tutorials, which I heard were fantastic. Qing Zhao couldn’t make it due to visa issues but gave her tutorial over Skype. Hooray for technology!

END_OF_DOCUMENT_TOKEN_TO_BE_REPLACED

A letter from Kurt Vonnegut to the head of a school board in North Dakota who burned copies of Slaughterhouse Five. (via MeFi)

An interview with Olympic bronze medalist John Carlos on giving a black power salute at the 1968 Olympics.

I really enjoyed this exhibit of Tagore’s painting at The Art Institute of Chicago, although my favorite drawing is not online, this bird was pretty cool.

I will post more about Allerton soon (I’m still on the road), but I wanted to clear out some old links before doing that. I’m starting my new gig at TTIC this week, and the last few weeks have been a whirlwind of travel and internetlessness, so blogging has been curtailed.

And a (not-so-recent) tour around the ArXiV — I haven’t had a chance to read these yet, but maybe once I am settled…

Via 530nm330Hz, a very interesting tidbit on the history of the one-time pad. A free tech report version is available too. The one-time pad XOR’s the bits of a message with a i.i.d. random bitstring of the same length, and is credited to Gilbert Vernam and Joseph Mauborgne. However, as Steven Bellovin‘s paper shows,

In 1882, a California banker named Frank Miller published Telegraphic Code to Insure Privacy and Secrecy in the Transmission of Telegrams. In it, he describes the first one-time pad system, as a superencipherment mechanism for his telegraph code. If used properly, it would have had the same property of absolute security.

Although in theory Miller can claim priority, reality is more complex. As will be explained below, it is quite unlikely that either he or anyone else ever used his system for real messages; in fact, it is unclear if anyone other than he and his friends and family ever knew of its existence. That said, there are some possible links to Mauborgne. It thus remains unclear who should be credited with effectively inventing the one-time pad.

Another fun tidbit : apparently mother’s maiden name was used for security purposes way back in 1882!

I really like shiso leaves and their cousins. I had a shiso plant but it did not survive the California sun / I have a black thumb. One of my favorite meals at ISIT 2009 was with Bobak Nazer, where we found an out-of-the way BBQ joint where they brought us a long box filled with 7 varieties of leaves, including perilla leaves. It makes me hungry just writing about it.

Kudos to Adrienne for the amazing photo.

There’s Only One Sun, a short sci-fi film by Wong Kar-Wai.

This looks like an interersting book on the homeless, especially given all the time I spent in the Bay Area.

Tyler Perry has shortened the title of his film adaptation of Ntozake Shange’s For Colored Girls Who Have Considered Suicide When the Rainbow is Enuf.

In other news, after ITW I went to Paris to hang out and work with Michele Wigger on a small story related to the multiaccess channel with user cooperation. While I was there saw some fun art by Detanico/Lain and caught a show by Fever Ray at L’Olympia. In fact, I’ll be headlining there soon: 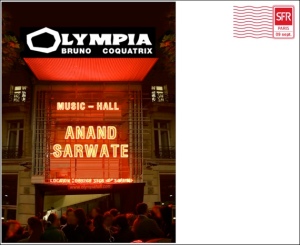 Have a good Sunday, everyone!

American “artist” Thom Ross has recreated a tableaux of Buffalo Bill Cody and his Wild West Show on Ocean Beach in San Francisco. This show was the equivalent of blackface minstrel shows of the 19th century but for Native Americans, yet is lauded in the press as a “tribute.” He himself is quoted as calling it a “Valentine to my hometown.” Of course, since Native Americans are such a marginalized population in the US, he can get away with it — life-size plywood figures of Sambo eating his watermelon with the head cut out so you can take a photo would never have made it off the drawing board. So much for cultural sensitivity, San Francisco.

It boggles the mind that such an astoundingly uncritical recreation is put up as a public art project in an ostensibly progressive major city. I’m used to dull things like giant arrows coming out of the ground. But is this art? Does it invite us to think about the image and it context? Does it intend to implicate us by inviting us to take the cutout photo-op because it should leave a dirty taste in our mouths? No. It’s simply a paean to a degrading, exploitative, and racist past. Valentine, indeed.

Here is some more information (pdf), courtesy of mark27. Hat tip to Jen for pointing out the article and the link to the flyer.

p.s. The comments on the Chronicle’s website are equally horrific.

p.p.s. There is some reaction from a show on KPFA.

I just finished up attending the 2007 Statistical Signal Processing Workshop in Madison. Normally I would have blogged about all the talks I saw, but (a) the only “talks” were tutorials and plenaries, and (b) I’m a little burned out to write much. Despite the fact that I applied to grad schools for signal processing and took the DSP prelim exam at Berkeley, I’m not really much of a signal processing guy these days. All of the submitted papers were given as posters, and despite being organized into “sessions,” all the posters were in the same room, so there were about 30-40 talks going on at the same time in parallel for 2 hours. I was a bit dubious at first, since my experience with poster presentations is that they have a large effort-to-value ratio, but this format worked for me. I was unfamiliar with about 80% of the problems that people were trying to solve, so going to talks would have made me confused. Instead, I could at least talk to someone and get the point of what they were trying to do, if not the scale of their contribution.

The one downside to the conference for me was that several of the posters that I wanted to see were in the same session as me, so I ended up missing them! Luckily I was next to “Distributed Average Consensus using Probabilistic Quantization,” which is right up my alley (from my work on gossip algorithms), but I could only listen in every once in a while. If only we could encode our talks using an erasure code — then if I listen to 7 minutes our of 10 I could interpolate the other 3…