This week I took a quick jaunt down to Atlanta to attend part of WIFS 2014 (co-located with GlobalSIP 2014). Kamalika and I were invited to give a talk on differential privacy and machine learning, based on our IEEE Signal Processing Magazine article. I’ve uploaded the slides of the tutorial to my website and we’re planning on making a video (audio over slides) version for SigView as well as on YouTube.

Much like last year, GlobalSIP had a somewhat disjointed, semi-chaotic feel (exacerbated by tiredness, I am sure) — it’s really a collection of semi-interacting workshops in the same space, and I knew people in several of the other workshops. Since I was there for a day and giving a tutorial at WIFS, I decided to stick with WIFS for the day. To give a sense of how confusing it all was, here’s a picture of the guide to deciphering the program book: 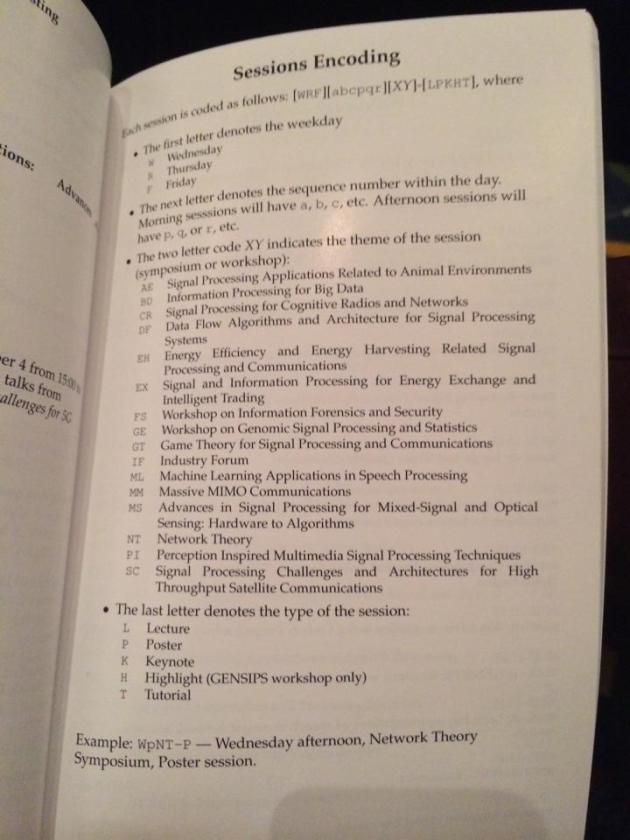 The keynote for GlobalSIP was given by Vince Poor on information-theoretic privacy via rate distortion (this is the work with Lalitha). Vince did a good job of not over-IT-ing it I think, which was good because the audience was pretty diverse and it’s not clear that many of the people there had even taken a course on information theory. This seems to be the big challenge in multi-disciplinary conferences like GlobalSIP (or large signal processing conferences in general) — everyone is in signal processing, but it’s a big tent and it’s hard to reach everyone.

Min Wu was the keynote speaker for the WIFS workshop on the day I attended. Her talk, on “Exploring Power Network Signatures for Information Forensics” was about how to glean information from power fluctuations in networks, or electronic network frequency (ENF). Different processes or operations have different power demands — by matching these signatures to an observed signal (e.g. a video), one can make inferences about the time/location/integrity of the data. For example, were the audio and visual tracks in a video taken at the same time or merged later? This whole area is quite interesting, and while I was sort of aware of this work I hadn’t really read up on much of it.

Perhaps it was the end of the semester kicking in, but I sort of took terrible notes on most of the talks and poster sessions at the conference, so I can’t really write coherently about the papers I saw. Unfortunately I had to run back to teach the penultimate lecture in my class. I guess now that I have a “real job” this is going to be the way it works from now on. Kind of sad, really.

This site uses Akismet to reduce spam. Learn how your comment data is processed.