When I first got to campus, I arrived a bit earlier than most of the staff and I didn’t have the key to my office. So I went to the Rutgers Math Library to hunker down and read a bit. It was winter break and so the place was empty. The furniture in there is pretty retro — it kind of reminded me of the Urbana Free Library as a kid. While browsing the stacks, I came across this: 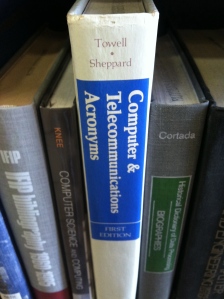 A book I saw at the Rutgers Math Library

One of the most… annoying things about wireless communications is the proliferation of acronyms. The one most people haven’t heard of is UE for “User Equipment.” That is, the cellphone or mobile or tablet. The one that everyone has heard of is LTE, for “Long Term Evolution,” an acronym with nearly zero informational content (

for those in the information theory crowd). How “LTE” passed muster with the marketing folks is mysterious to me. Perhaps being more or less meaningless was a plus in their book.

In any case, go to any tutorial on actual wireless technologies (like the LTE tutorial I went to), and it quickly devolves into a soup of acronyms from which few travelers return unscathed. They may be great if you already know what they mean, but it’s a disaster for trying to teach people.