Due to extensive traveling around. At the end of August and beginning of September I attended a workshop at the American Institute of Mathematics on Permanents and modeling probability distributions. It was a lot of fun, and a lot different than any workshop I’d been to before. There were only 20 or so participants and every day we’d break out in smaller groups to actually work on some sub-problem or area. By the end of the week I felt like I’d had a crash course in large-alphabet probability estimation and also got a sense of the huge range of problems and techniques (from exchangeable random partition processes to Markov chain Monte Carlo) involved in tackling them.

Last week I gave a talk on gossip algorithms at UC Davis and got a chance to talk with a lot of people there. It was a great trip, except for the 6:30 flight time out of San Diego. Then last weekend there were heirloom tomatoes: 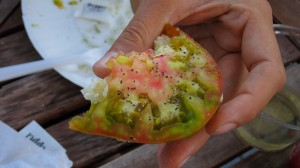 4 thoughts on “Posting has been light”

This site uses Akismet to reduce spam. Learn how your comment data is processed.