Interestingly, the internet in my hotel is provided by Meraki, which was speadheading an urban mesh network in San Francisco. On Wednesday we took the train from Anchorage to Seward, named for the US Secretary of State who pushed for the purchase of Alaska from the Russians for the sum of $7.2 million. The train ride is very scenic and we passed some beautiful mountains, the Turnagain Arm (named by the navigationally frustrated Captain Cook), and a beautifully clear lake: 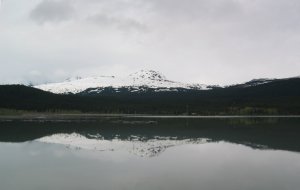 In Seward we checked out the Sea Life Center, which had some puffins:

Today we went on a day long tour via boat of the Kenai Fjords National Park and saw the Aialik Peninsula and Aialik Glacier. I haven’t gotten the photos from there yet but if any turned out nicely I’ll post ’em.